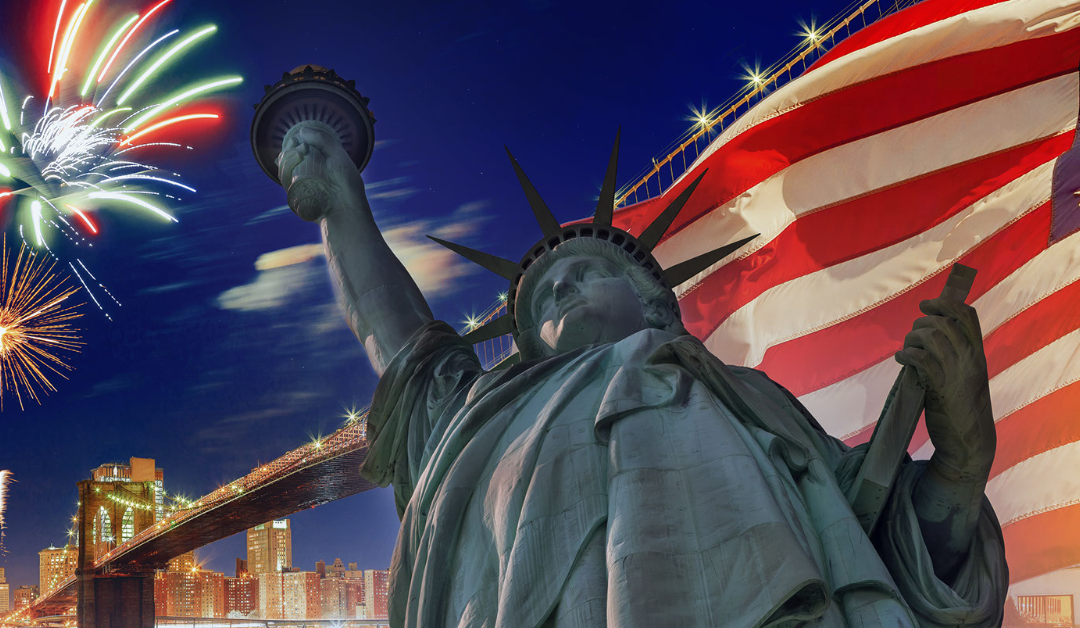 Where does privacy fit into our concepts of freedom, independence, and democracy? Under what circumstances have our right to privacy – our “freedom from unauthorized intrusion” – been violated?

Most of us consider privacy an essential component of freedom. As we approach this 4th of July holiday in the United States, it’s worth celebrating privacy as one of our fundamental freedoms and contemplating how we can maintain personal privacy in the modern world.

Many of us feel that privacy is a right – and it is delineated as such in the California State Constitution (although there is no express right to privacy in the U.S. Constitution). If we feel strongly about that right, what actions can we take to protect and maintain it?

We can be patriotic and, at the same time, voice concerns about government surveillance in the name of national security and the prevention of terrorism. We can love and be proud of our country and still speak up against the creation of a surveillance state.

We can respectfully disagree with Eric Schmidt’s famous quote on privacy: “If you have something that you don’t want anyone to know, maybe you shouldn’t be doing it in the first place.”

It’s a delicate art and science to balance the societal and individual interests of privacy, security and freedom. If we value our privacy and wish to preserve one of our fundamental civilized rights we should remember: It’s OK to care about our privacy, even if we have nothing to hide.

American Opinions on Security and Privacy are Divided and Contradictory

A recent NBC News Online Survey conducted during June 3–5, 2015 suggests our opinions on security and privacy are divided and in some ways contradictory.

According to the survey:

Privacy concerns remain an issue for both the government and the private sector.

From the same survey:

“A slim majority of Americans – 53 percent – say they trust neither government agencies nor businesses like cellular telephone companies and internet providers to keep records of their phone calls or internet activity secure. Slightly more trust private business over government agencies – 21 percent to 11 percent, while another 14 percent trust both equally.”

Consumer Concerns of Government and Business are Rising

The TrustArc 2015 US Consumer Confidence Survey similarly found that consumer concern of the government and business is rising with 27 % reporting government surveillance as a top concern.

Consumer trust remains low – 45% of respondents in the TrustArc Survey felt that privacy was more important than national security.

One of the ways reported to increase trust was enhanced transparency and choice: 22% noted a way to lower concern was for governments to be more transparent about how they are collecting and using data.

If we must trust the efforts of the government to provide us with national security, but possess significant reservations about the trustworthiness of both government and private industry to protect our information, it’s clear that we have an important role to play in the protection of our privacy.

Fortunately, we still live in a society that allows for intellectual debate and where we can influence our institutions to acknowledge our collective voice.

When we’re aware of privacy infringements, we have the power to protect our rights. Consider the case of the NSA’s telephone metadata collection program which was ruled illegal under the Patriot Act this May.

A three-judge panel ruled there was no evidence Congress intended for the “bulk collection of every American’s toll-billing or educational records and to aggregate them into a database.” Judge Gerard E. Lynch of the Second Circuit Court of Appeals said the government’s rationale could be used for many different types of records and that “the interpretation that the government asks us to adopt defies any limiting principle.”

Indeed, it was this impossibly broad interpretation which made so many Americans uncomfortable with the program. The idea that the government could aggregate and have at its disposal such a large and powerful dataset ran afoul of commonly held beliefs about liberty and privacy in the U.S. As this follow-up article in CNN reports:

“Such expansive development of government repositories of formerly private records would be an unprecedented contraction of the privacy expectations of all Americans,” [Judge] Lynch added.

The court said that if that were required by national security, at the very least, such a “momentous decision” would be preceded by “substantial debate” and expressed in “unmistakable language.”

However, it appears that the continued bulk collection of citizens’ data is allowed – at least temporarily. After 180 days, the NSA will have to end the surveillance according to the USA Freedom Act. The United States Foreign Intelligence Surveillance (FISA) Court rejected the promising court decision from the Second Circuit where NSA data collection was found to be illegal.

“Second Circuit rulings are not binding on the FISC and this court respectfully disagrees with that court’s analysis, especially in view of the intervening enactment of the USA Freedom Act,”

It may run contrary to a post-9/11 mindset which implicitly values security over privacy, but transparency and public debate are an essential part of protecting a democracy. The Second Circuit court’s decision regarding the NSA program was a step in the right direction – and the FISA court’s decision is a disappointment.

Consider integrating these habits as part of your privacy practice:

Be grateful for the freedoms we enjoy.

A gratefulness practice includes appreciating our freedoms in our thoughts, words and actions. We can respect our government, be thankful for the freedoms we enjoy, and take steps to ensure such freedoms are valued and protected. This includes the freedom from unreasonable surveillance.

Don’t be afraid to question our government. Remind yourself to continue to inquire about the intent, scope and oversight of surveillance programs. Take responsibility by challenging instances where you feel our government has not struck the right balance between privacy, security and freedom.

Speak up and take action in support of your beliefs.

Reflect on the perspective on encryption and surveillance of privacy advocate Phil Zimmerman (co-founder of the global encrypted communications firm, Silent Circle.)

This Independence Day celebrate privacy as one of your personal freedoms.